Getting advice from a fake expert will kill your business. I’m amazed as to how many are out there giving shockingly bad advice. Even they don’t have their own shit together! 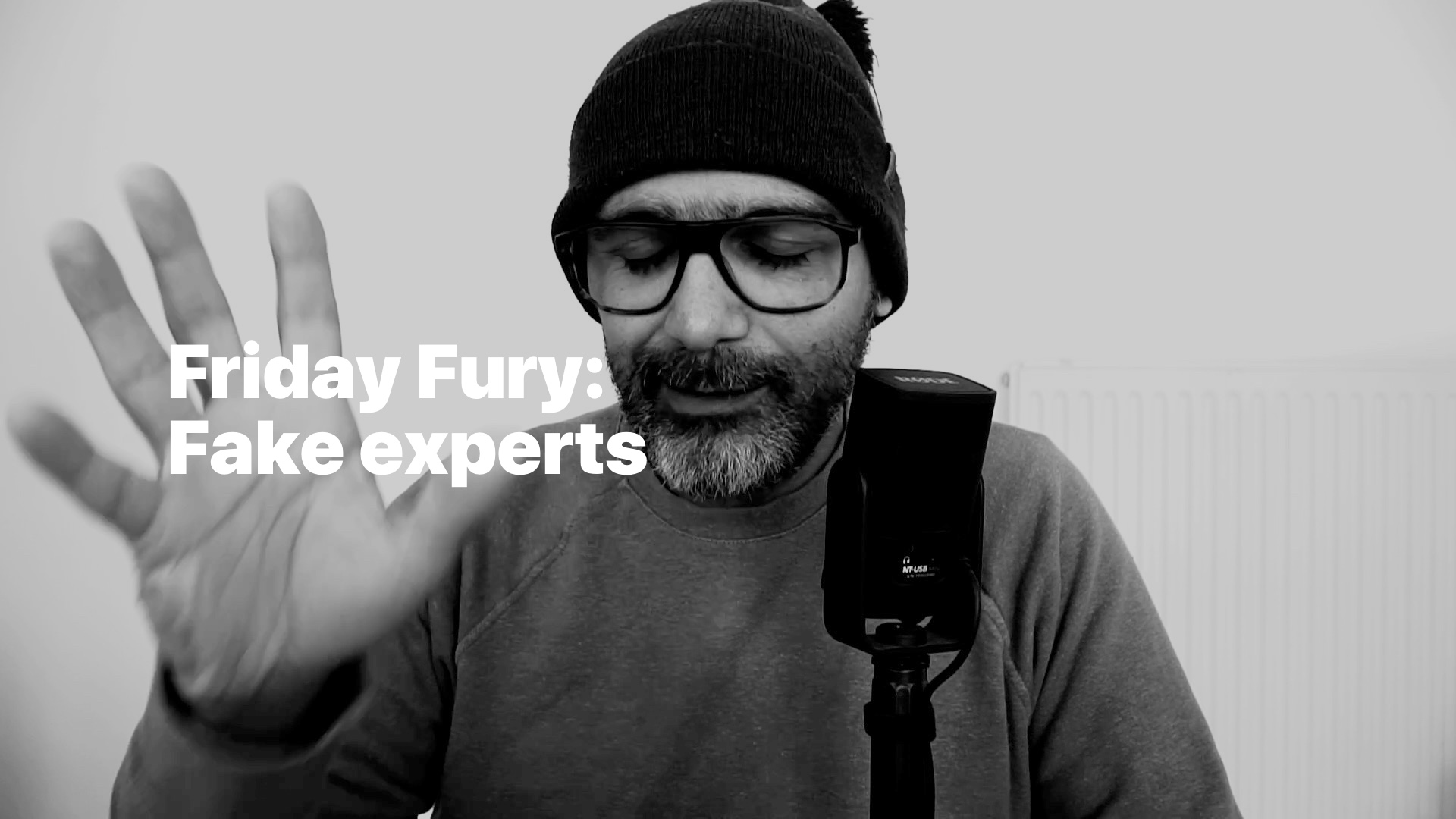 Welcome to yet another Friday Fury.

My Friday Fury episodes been going quite well, actually, going for a while. And this is where I vent about software and tools and things that just annoyed me.

I will be swearing this episode like I do in all my Friday Fury episodes. So if you're not into that kind of thing, then don't watch this. Watch all my other videos because they're all pretty good.

We hear about "fake gurus" buying and... selling courses that do absolutely nothing. And "fake experts" to me are kind of the same thing.

I've recently gone back onto social media. On to platforms that I would never go on to, normally.

But I thought, you know, let me try it again. See if I can get some traffic etc. Now some work, in fact, they all kind of work, but I don't think I want to be lumped in with these "fake experts".

To me, an expert is someone who's done something for many years and honed their craft, and know how to do things with their hands tied behind their back.

But these fucking assholes read up or watch a YouTube channel, read an article or read the press releases of said platforms and then become "experts".

And they give the worst fucking advice I have ever fucking heard. It's unbelievable.

Now I'm in... I'm not an expert. I'm not a social media expert or anything like that. But I know, for me, what works and what doesn't.

But getting advice from these fake fucking ass, lame mass "experts" about how I should do something is just fucking mind blowing. And it pisses me off.

And to be honest, it was all fucking wank. I mean, it's unbelievable how these fake "experts" get to where they are.

Because I don't want to be lumped in with these fake hard "experts". Because I it's just shit.

I mean, I'm speechless as to how bad it actually is out there. You go onto Twitter. You go to LinkedIn. You go... I mean, any social network.

But you look at things like coaches and consultants and stuff and the way that they've set up their profile. To me, it's a fake guru. This is, you're not a fucking expert. You're a fucking fake guru selling shit that you don't know fuck all about.

Now, bear in mind, some do. Some experts know what they're doing. Some coaches have been coaching for many years, etc. etc.

But if you... this pandemic has actually caused a lot of issues as well because what's happened is that people thought...

oh fuck, I need to make some money work online. What should I do? Let's be a coach.

I'll be at this coach and that coach and a fucking pencil coach at a drink... how that... how to drink Coca Cola coach. It's just fucking insane.

I'm going to blow my own trumpet. I've been doing tech for like over 30 years. I'm a fucking expert in what I do, but to be lumped in with these assholes... I was going to use the C-word... cunts that read press releases and watch YouTube videos and go...

You know what, I'm an expert.

Now, some might argue. Some may argue that if you know more than the next person, you're an expert, and that's at a utter fucking bullshit.

You just know more than the other person. You can help them, but don't ever call yourself a fucking expert in that field. It's just fucking ridiculous.

It just boils my fucking blood. Grinds my gears. There's more, but I can't think of any.

Anyway, as always, Keep IT Simple.

And I'll see you in the next one. Have a great day. Ciao.